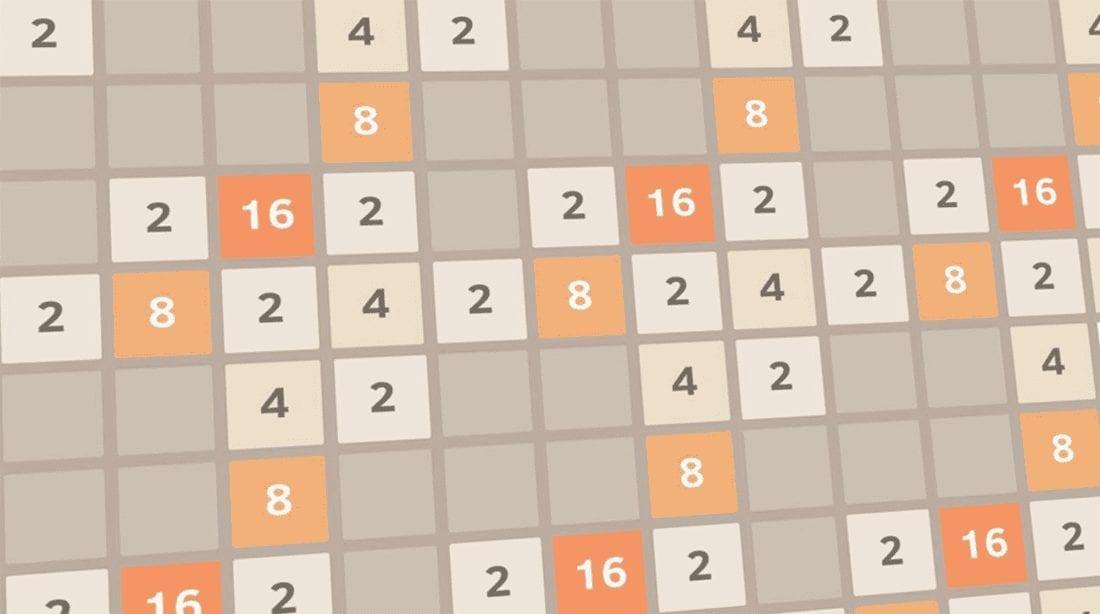 I spent a lot of my time a few years ago playing this game. Certainly one of the most addictive game! Moreover, the learning phase is very short and you quickly enjoy playing. But after many games you realize that it becomes difficult to go further. Therefore, you have to change the strategy you used to achieve it. Above all I tried to resume many reflections in my bot 2048.

The goal of this project is not to have the perfect bot 2048 but a comprehensible code, strategy and algorithms. Moreover I tried to detail and explain all aspects. It is often more difficult to keep the solution simple.

We will touch on the following aspects in this bot 2048 article:

This project is written in Go and hosted on Github at this following URL: https://github.com/lunatikub/bot2048.

2048 is played on a 4×4 grid, with numbered tiles that slide when a player moves them using the four arrow keys. At every turn, a new tile will randomly appear in an empty spot on the board with a value of either 2 or 4. Tiles slide as far as possible in the chosen direction until they are stopped by either another tile or the edge of the grid. If two tiles of the same number collide while moving, they will merge into a tile with the total value of the two tiles that collided. The resulting tile cannot merge with another tile again in the same move. You can play the game here.

A board has 4 lines, 4 columns and 16 (4×4) tiles from the top left corner at coordinate {y:0,x:0} to the bottom right corner at {y:3, x:3}. So the implementation approach is to encode an entire board as a single 64 bits integer, where the tiles are the nibbles (i.e. 4-bit chunks) and a single line or a column is a 16-bit quantity. Further a nibble, with 4 bits, can take 16 different values from 0x0 to 0xf (0000 to 1111 in base-2 numeral system). So we cannot store directly the value of a tile but we can store his power of 2. With this strategy a tile can take a value from

. However in the real world

but in our case

, I know it’s a mathematical aberration but it simplifies the implementation.

The aim is to optimize as maximum the memory and CPU to allows the AI to search through a huge number of game states in the shortest period of time because:

Bit shift operations are used to extract individual tiles. Firstly we have to process the shift value in order to extract a tile:

We precomputed all the shifted values in a slice to have a direct access from coordinates:

Now we can easily get or set a tile with the appropriate mask applied.

Bit shift operations are used to extract individual lines. As the tile, we precomputed the shifted values in a slice with the following formula:

Now we can easily get/set a line, here we don’t need to apply a mask with the explicit cast.

There are four available moves in 2048 game:

This script has a base function to transform 2 tiles:

Therefore we have to apply this transformation for each tiles couple of a line or a column with a specific order. Let’s take the example for the right/down transformations (left/up are being symmetrical).

Therefore we can generate the transformation.go file:

Therefore it is really simple to apply a move to a column or a line only with an affectation. Let’s take an example with the left move. Then we apply the transformation on each line from 0 to 3 and set it in place.

In the literature, almost all the works aimed at designing artificial players (like my bot 2048) are based on an evaluation function and a tree of possibilities. Firstly we will explain the heuristic to board scoring. Secondly we will see the Expectiminimax algorithm which is creating the tree of possibilities. Unlike a sudoku solver where there is no place for random, the bot 2048 with AI can make mistake because the decision cannot be the best, due to many things, like the random placement of the tile after each move or the limited depth of the algorithm.

The assumption on which the scoring algorithm is based is rather simple: if you want to achieve higher score, the board must be kept as tidy as possible. In particular, the optimal setup is given by a linear and monotonic decreasing order of the tile values. There are 8, and only 8 different paths to browse all the tiles of a board (S: start, E: end).

In order to optimize the evaluation of a board, a python script path.py pre-computes and generates these paths with a simple algorithm. In input it takes an origin coordinate {y,x}, a main and a secondary direction among the following values: Right/left/Up/Down. Firstly we have to lookup for the next tile by applying the main direction.

Here we are with the following inputs of different paths for the script:

Then the output Golang file generated:

To enforce the ordination of the tiles in a monotonic decreasing order, the score is computed as the sum of the linearized values on the board multiplied by the values of a geometric sequence with a weight.

All the height paths could be evaluated at once, the final score is the maximum score of any path.

Therefore we are able to evaluate a board, we have to create the tree of possibilities. Consequently we will use the expectiminimax (more precisely a expectimax). This algorithm is a variation of the minmax. The levels of the tree alternate between max nodes (player moves) and chance nodes (random sets) until the depth limit of the tree has been reached. Each “turn” of the game is evaluated as a “max” (representing the AI player’s turn) and a “chance” node as a “min” (representing the board’s turn).

The player’s turn can be resumed by creating 4 new nodes (4 boards) related to the 4 moves.

The board’s turn can be resumed by creating 2 new nodes (board) for each empty tile, one filled by a 2 and the second by a 4.

By recursion the best move will be chosen when all possibilities will be evaluated
We only evaluate the board for each final node (when the maximum depth is reached).

My bot 2048 is doing the job as I wished! Of course a lot of improvements can be done. But the initial goal to discover the expectimanimin algorithm and the golang bitwise operators are a success. Feel free to leave a message for any questions or suggestions, I’ll be more than happy to answer.

The benchmark has been made in order to compare performance in function of the depth chosen for the algorithm. So the script bench.py has been used to bench the bot. It does 20 runs for each depth from 1 to 8 and make average of each statistic.

Definition of each column:

I have identified three main tasks to improve bot 2048 on three different aspects of the code: